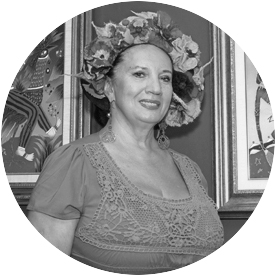 Author: Irina Timokhova
Art critic. Head of the Scientific and Methodological Department of the Museum of Western and Eastern Art
Life&Art
5 minutes for reading 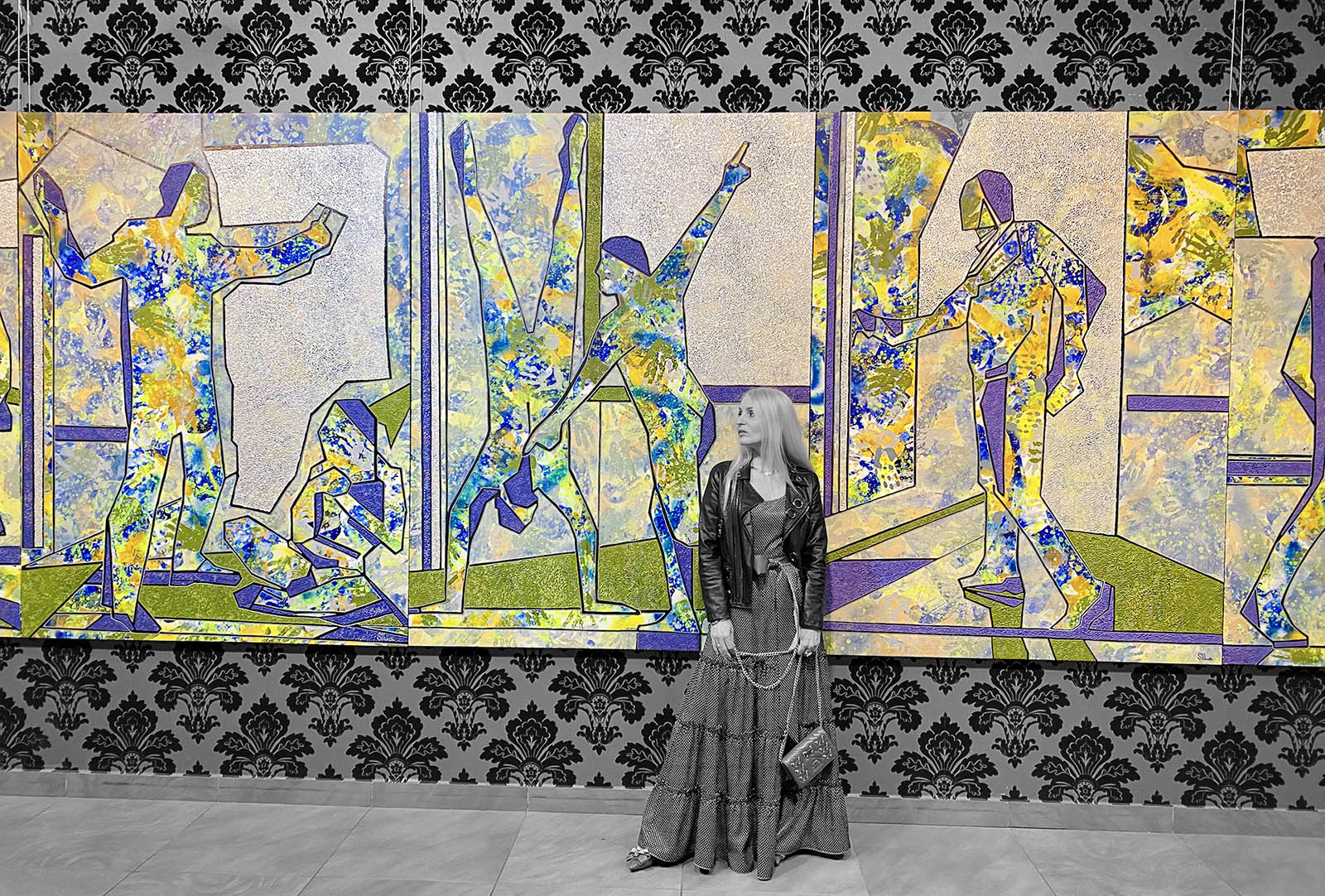 Irina Sushelnitskaya burst into the art space of Odessa like a bright comet, showing her new works at the exhibition “Quint + Essence”, which was held with great success in the Odessa Museum of Western and Eastern Art in March 2021. Her colorful large-format works presented in series surprised and the visual delight of the audience with its extraordinary airbrushing technique of painting and new alternative ways to represent the era of the Internet.

The exhibition turned out to be “significant” in the literal and figurative sense. In our exhibition practice, we will not find any analogies to it. The artist has elevated the recognizable world to a symbolic language, which is the most accessible, capacious, international phenomenon. Signs-symbols such as a square, a circle, a spiral, a triangle, a cross, a hand sign, a tree, a bird, having passed through the centuries, organically merged into the circle of modern computer symbols.

Sushelnitskaya is a multidisciplinary artist: she works in various types of art – painting, graphics, sculpture, installation, performance. Irina graduated with honors from the art and graphic faculty of the SUNPU named after K.D. Ushinsky with a degree in fine and decorative arts, having received a master’s degree. Having a classical education, she did not stop, but went further, having studied almost all the latest trends in contemporary art.

We exist against a changing background of images, amid an endless stream of information, plunging into a new augmented reality. My works are my thoughts about the visible and hidden world, about feelings experienced, about the conscious and unconscious, about the real and the virtual. My creativity allows me to be myself and be free, and bare my soul

Irina signs her works with the SILA monogram, formed from the initial letters of her last name, first name and patronymic. This signature sign is a characteristic of her work. Irina Sushelnitskaya’s painting keeps up with media art, turning to video art, digital art, computer graphics, 3d printing. The artist is like a repeater, ready to receive time signals. 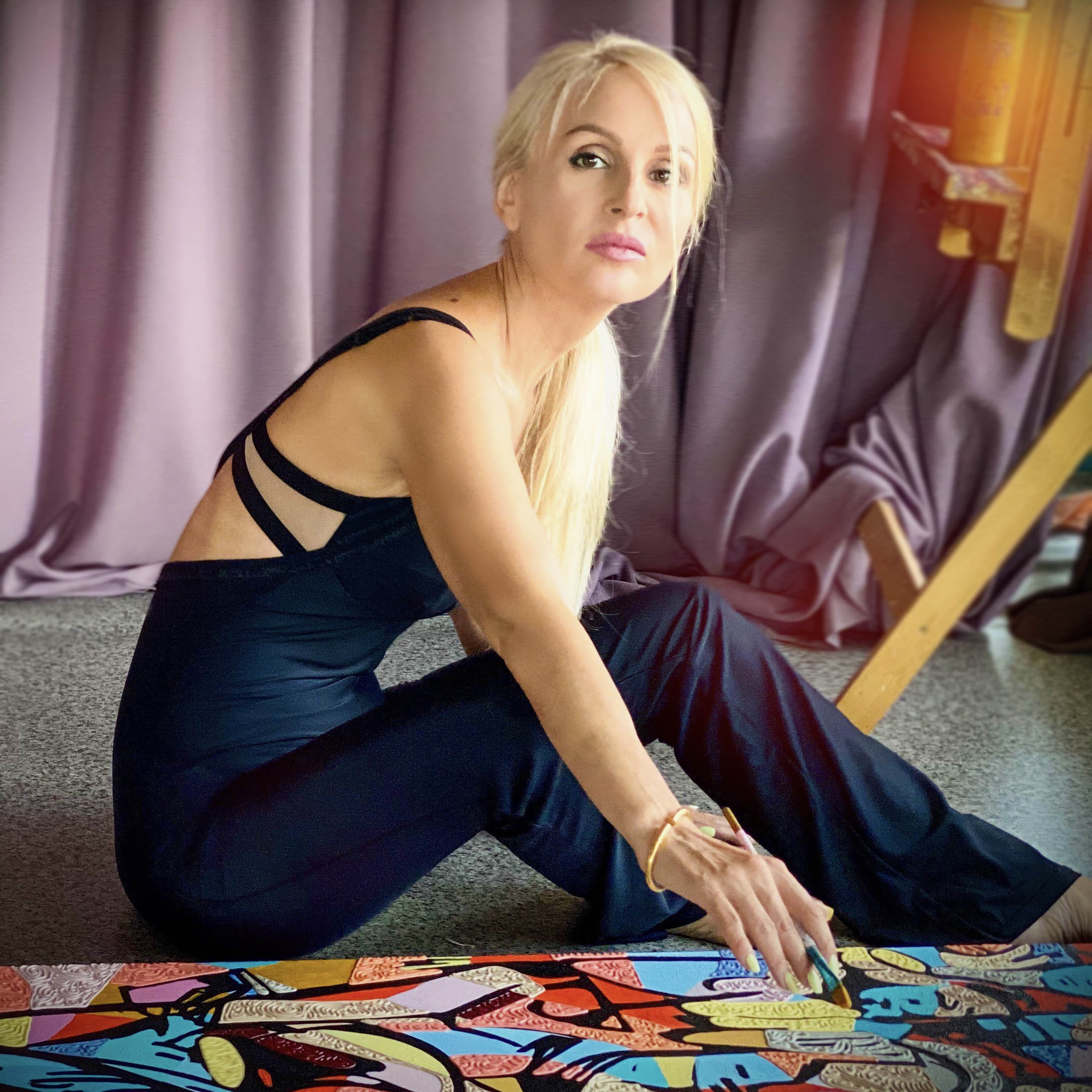 Her triptych “Gestalt” resembles a large jigsaw puzzle – a puzzle game, which consists in reconstructing a complete picture from the sum of its components. Our brain is more comfortable working with a whole image than with many small details, since order, as opposed to chaos, is perceived as aesthetically unified and beautiful in the perceived object. In her works, Irina Sushelnitskaya takes the position of a researcher who creates a new reality, resorting to sign-symbolic communication.

Her spirit longs for cosmography – images of the Universe, heaven and earth, 4 elements, as well as manifestations of the relationship between them and man. For clarity, everything is presented in her works in the form of pie charts, which were widely used in the Middle Ages. “Fortune”, “The wheel of samsara”, “Ouroboros” embody the cyclical nature of time, the universe and symbolize logic, order, harmony.

“Ouroboros” is a world serpent that wraps around the earth and bites its tail. In ancient Egypt, this image meant a threshold moment between death and rebirth: “my end is my beginning” – an optimistic outlook on life during a pandemic! Irina’s trinity of caterpillar, cocoon and butterfly is directly related to metamorphoses – transformation, the transition from one form to another with the acquisition of a new appearance.

Sushelnitskaya is associated this trinity with the motive of the spiritual growth of a creative person, with the motive of initiation, which marks the transition of a person to a new stage of his development and capabilities. This motive is the semantic axis of all her work. Acrylic relief painting by Suhelnitskaya, which takes tons of paint, determines both the structure of the work and her mythological thinking.

The shapes and textures that I use have a plastic effect: a winding, floating, elusive form like floating time, fixing the state of movement. Nothing remains the same, everything is in an endless stream, now uniting, then falling apart, and disintegrating, again strives for unification

Our time is in a state of oscillation between aspects of the cultures of modernism and postmodernism. The use of the prefix “meta” derives its origin from the Platonic term metaxis, which describes the fluctuation and simultaneity between two completely opposite concepts. Thus, the irony, frivolity of postmodernism is combined with the sincerity of metamodernism. The optics of metamodernism creates a new paradigm in art and culture.

A paradigm dominated by ethical and aesthetic principles. Metamodernism encompasses the process of reviving sincerity, hope, romanticism, attraction, and a return to shared concepts and universal truths. He does not offer us a ready-made idea or concept, but offers to find it on our own. Turning to abstract painting, Irina did not completely abandon figurative art.

She creates silhouettes of human figures, surrounding them with a dense web of lines, as if enveloping these images with some kind of mystery, perhaps an Internet web. Her voluminous boxer rocking figures create a pendulum movement between the past and the future. Living in a pandemic, feeling the threat of a full-scale war in Ukraine, the metamodern artist Irina Sushelnitskaya does not hide in a mythical ivory tower, but enters into a struggle to improve the life and mood of all people on earth.

She creates her ornamental-encoded message with signs-symbols, signs-signals, signs-models with an airbrush, like a pencil or a pen. In the maneuvers of airbrushing, the artist achieves absolute technical perfection, once again confirming her perseverance, endurance, creativity and originality. The hand sign appears in her works quite often.

The hand is perhaps the most “speaking” organ of our body, a means of expressing feelings, a sign of action. In fact, the hand is what made us human, so its image can be perceived not only as a sign of the presence of a person and his exploration of space, but also as a symbol of his victory and strength. Irina Sushelnitskaya has created her own unmistakable style of airbrushing, which includes figurative and abstraction, which is beautiful and optimistic. 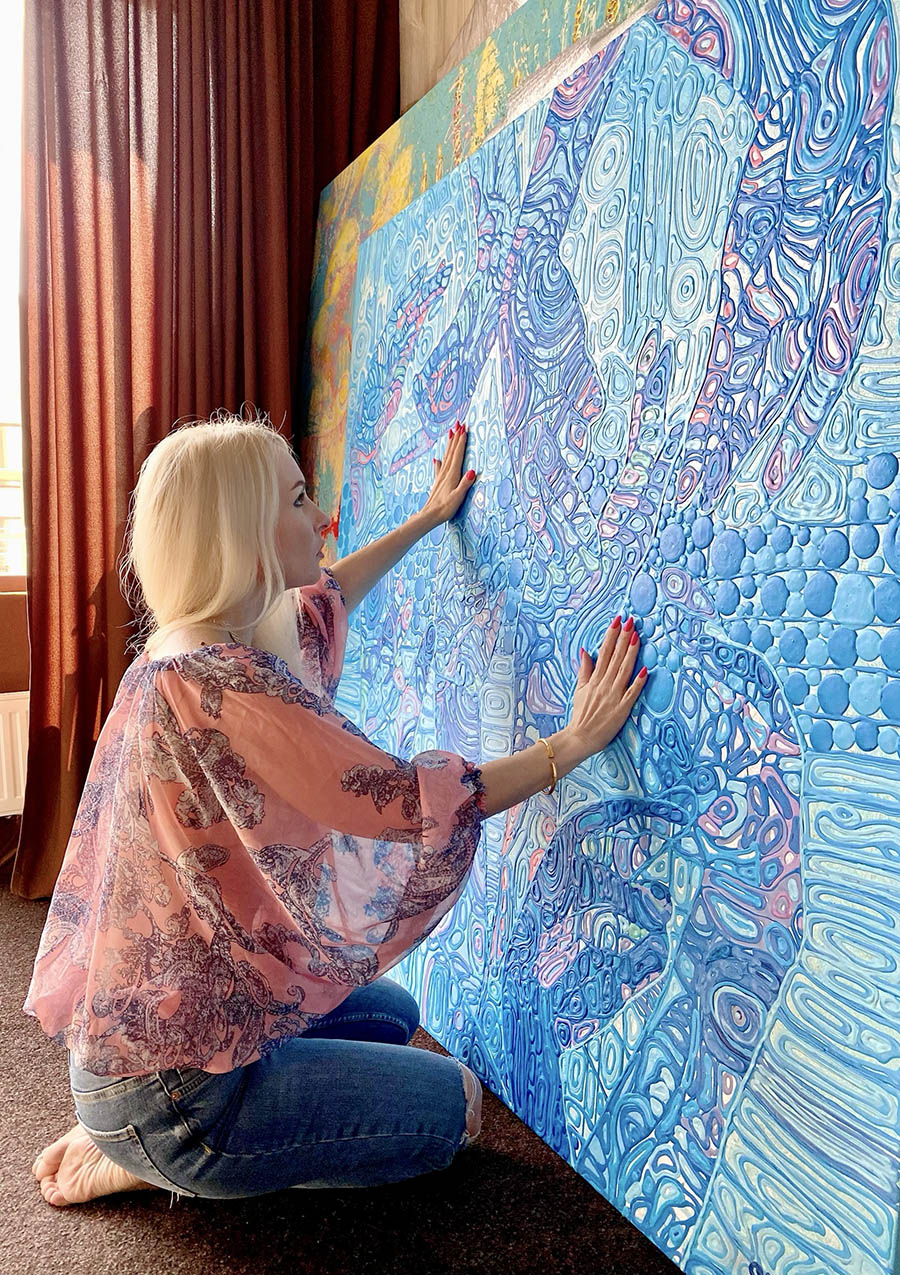 Her paintings are a message and at the same time a logical game of Go, which originated in ancient China, for a tone of mind with a deep strategic content. A game that explores the fabric of the world we live in and reveals the future. The artist’s strategic goal is to pull the viewer out of everyday existence.

Creativity for me is beauty, positive, a state of elation, an exchange of energy

It is no coincidence that her favorite size of paintings is 2 x 1.5 = 3 m. The main positive meaning of the number 3 is love of life and all-conquering optimism. This is a “celebration of life” that does not stop for a minute. In addition, the presence of the sacred “three” among the numbers of the numerological series indicates a special vision that allows you to determine what exactly is lacking in the world for perfection.

And the urgent need to fill this gap, which Irina Suhelnitskaya brilliantly does in her work, forcing the viewer to go beyond the usual framework of stereotypical thinking. One thing is clear, the works of the Ukrainian artist are a phenomenon of modern culture, worthy of the best museums and European Biennials.