THE MAN OF THE DESERT: symmetry and light by Evgeny Katz (Part I) 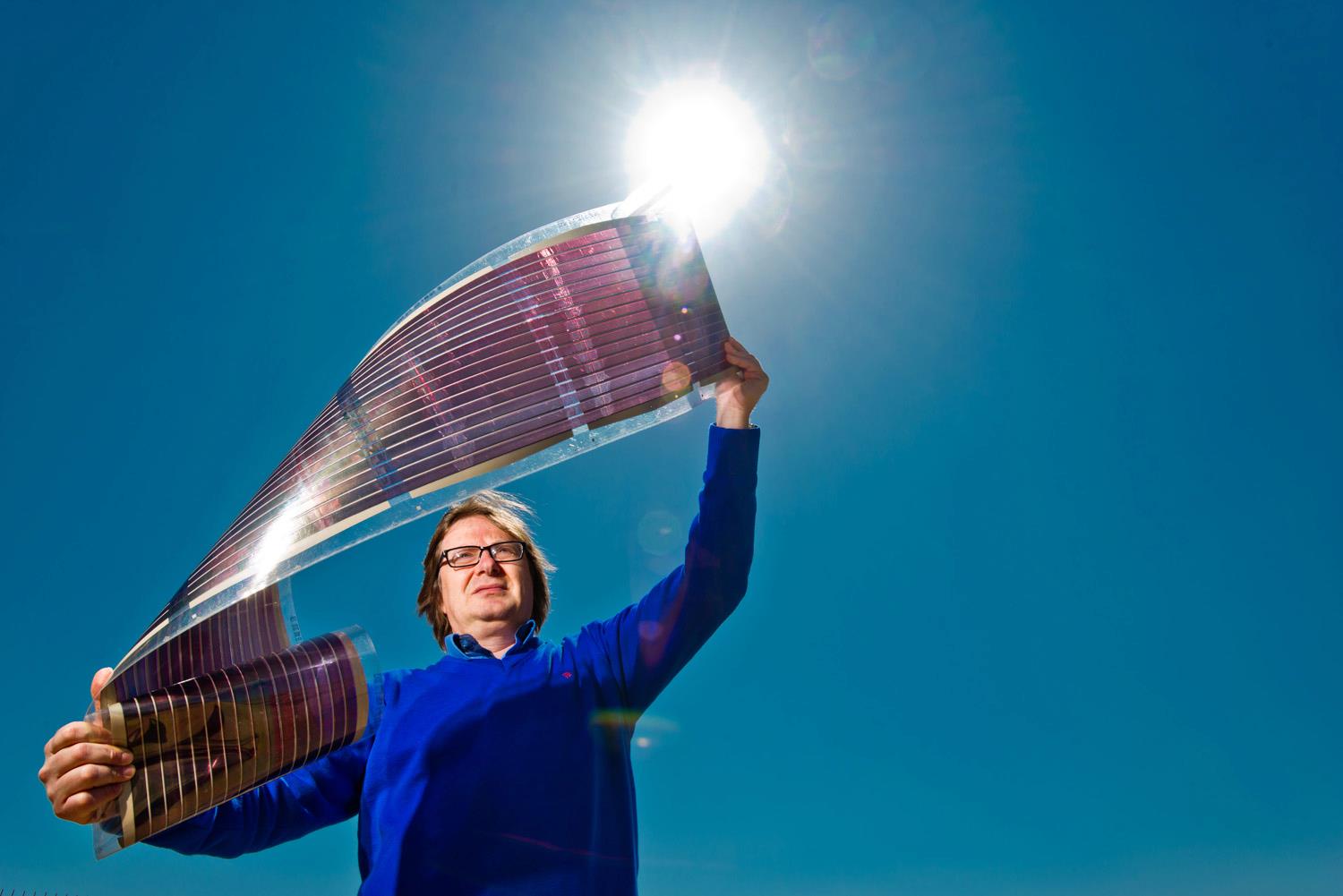 The desert is a cultural symbol and a scientific site. This is how Israeli professor Yevgeny Katz sees it. His research interests are technologies for converting solar energy into electricity.

But work on breakthrough technologies at the Institute of the Desert pushed him to something more … Today Professor Katz shares his thoughts on this topic with the readers of our almanac.

DESERT AS A RESOURCE

Israel, as you know, is a small country, but its nature is incredibly diverse – as many as six climatic zones! True, for 60% of the territory, this diversity is irrelevant, since they are occupied by the Negev desert. On the scale of a tiny country, these are very large spaces to be so easily neglected.

Therefore, practically from the very beginning of its statehood, Israel considered the desert as a resource. As an object of science, it is actively pursued at the Ben-Gurion University of the Negev. Already from the name it is clear that our university is located in the Negev desert.

I work for a university department called the Desert Research Institutes. Its mission is to develop technologies that help people live and work fully in the desert. Essentially, these are three institutions. The first is the institute of water. Today, 70% of the fresh water consumed by the Israelis is obtained by desalting sea water.

And from year to year, the production of desalinated water continues to increase. In the Middle East, water has been a key and vital strategic resource since ancient times. This is as obvious today as it was 5,000 years ago. It is not surprising, therefore, that technologies for obtaining water in deserts are the pride of both our university and all of Israel.

The next technological direction logically follows from the first one – it is the development and implementation of highly efficient agricultural technologies that adapt to the conditions of the desert. This is a zone of scientific interest for specialists from the Institute of Agrobiology and Agrochemistry.

And finally, the third direction and the corresponding Institute for Energy and the Environment. I work in his Department of Solar Energy and Environmental Physics. Actually, from the name of the department it is clear what I am doing. Energy regulation is a very important component of the “desert economy”, in which it is directly related to the management of desalinated water resources.

THE SUN HAS NO ALTERNATIVE

It is clear that as an employee of the Institute of the Desert and concurrently director of the National Center for Sun and Solar Energy, I am primarily focused on the problems of renewable energy, the main source of which, of course, is the energy of solar radiation. Today, humanity has learned how to effectively convert it into relatively cheap electricity.

The problems do not start in the field of production, but in the field of energy storage. If the cost of the converted electricity is included in the cost of storage devices (batteries), then it rises sharply. Nowadays, this is the most important factor that hinders the large-scale development of solar energy.

On the other hand, the scientific work that is being carried out in Israel today shows that by “crossing” the processes of desalination and photoelectric conversion of light, it is possible, firstly, to dramatically reduce the cost of desalination, and secondly, to solve the problem of energy storage. This function can be performed by the desalination process itself.

Energy strategy issues are coming to the fore all over the world today. The introduction of new technologies will inevitably increase consumption and demand for electricity. Consider trends such as electric vehicles, digital currencies, reducing the carbon footprint and tackling atmospheric emissions that negatively affect the planet’s climate … All of this requires more electricity.

There is now a consensus in the scientific community that the climate change we are observing is directly related to human activities. From this, some people conclude that we must curtail technological progress, and then the planet will return to climatic norm. This is a fundamentally wrong, dead-end path. A return to the Stone Age will not help us solve global problems.

We can change the situation only at a new stage of scientific and technological development. The latest technologies, including desalination technologies, require continuous growth in electricity production.

And today the only optimal and reasonable way to increase it is “solar” electricity. This fact is increasingly recognized by scientists around the world and humanity as a whole. The global society is now on the verge of the most powerful revolutionary changes associated with the use of photoelectricity.

However, there are technological factors that are holding back the photovoltaic revolution. The main one in Israel – no matter how paradoxical it sounds – is the lack of territories where a solar power plant can be located. After all, the desert seems to be full of free space, build whatever you want. In fact, this is far from the case. Most of the Negev Desert is occupied by national reserves and parks, where the construction of industrial facilities is prohibited.

And solar stations, using thermal heating of water with concentrated sunlight to generate electricity, can only be installed on a flat surface.

But the deserts of Israel are very mountainous, it will not work to level them all on an industrial scale. To date, Israel has built a fairly large land-based solar power plant of this type. Fortunately, the Israeli bureaucracy and lawmakers have come to understand that the land is “not rubber.”

Therefore, in the very near future the law on the so-called “second application” will come into force. That is, if you want to build a solar power plant on the roof, then photovoltaics must be connected to something else. For example, power generation on a rooftop can be combined with a greenhouse facility that is located under that roof. It is planned that in this way the deficit of production space will be overcome.

The key difference between solar energy and thermal or nuclear energy is that it is not compact. The energy density is very low here, and it has to be collected from large areas. And mankind has less and less free and at the same time suitable spaces for this. That is, the land, the territory becomes the resource that humanity will begin to save very much in the very near future.

It is not surprising, therefore, that solar energy production is transforming into a global multibillion-dollar business closely related to geopolitics and geoeconomics. So far, China is the clear leader in the “solar” race. It produces the vast majority of solar panels in the world. Most of these batteries are based on crystalline silicon.

This technology is not new, it has been improving for decades. Today, the cost of silicon-based solar cells is quite low. However, their efficiency has already approached its theoretical limit. To move forward, fundamental scientific breakthroughs are needed.

The solution came when a family of new semiconductors, metal halide perovskites, was discovered. Solar cells based on them are much cheaper than silicon ones, since they can be produced from solutions, for example, printed on a printer.

In addition, the prospect of obtaining a “tandem solar cell” opens before us. If metal halide peroxide is applied on top of silicon, the efficiency of the solar battery increases from 26% to 35–40%. And this is very important.

The only thing that hinders the development of this technology is its low stability; materials quickly degrade in the light. The area of ​​my current scientific interest lies precisely in the search for solutions that will help to increase the service life of perovskite and tandem solar cells.

THE PERFECT LIGHT OF THE NEGEV DESERT

The place where we conduct our experiments doesn’t just have a lot of sunny days a year. Our sunlight is very high quality. On a cloudless day, its intensity is close to the laboratory standard of the natural solar spectrum accepted throughout the world – AM 1.5. Sunlight is known to consist of direct and diffuse radiation scattered in the atmosphere. Thanks to it, we, for example, can see objects in the shade of the sun.

Since the time of Archimedes, we have been able to concentrate direct light using the so-called geometric optics – lenses or mirrors of a certain shape. And diffusely scattered light cannot be concentrated like that. So, the peculiarity of the Negev desert is that here almost all the light is direct. This means that we can work effectively with a very high concentration of it.

Solar power standard – 1 sun – 100 mW per square centimeter. In real operating conditions of solar power plants, this power is significantly less. We have learned to concentrate natural sunlight up to 10,000 suns!

The concentration of natural light begins outside the laboratory. Then, with the help of optical waveguides and other devices, the light is transported to the laboratory in an ultra-concentrated form.

We use this for a variety of experiments: we synthesize new materials, accelerate their degradation and study its mechanisms, conduct an accelerated stability test. This is what we are doing to develop stable perovskite devices. Our research is interdisciplinary, it is at the junction of several sciences: physics, chemistry and a kind of “solar engineering”.

Photo from the personal archive of Evgeny Katz

Science
VERSION: why did Zuckerberg decide to rename Facebook to Meta?
Science
NOBELS AND IG NOBELS: laugh, then think!
Science
Like a cat and a dog: who in the world is smarter, prettier and sweeter than everyone else?
Science
SCHIZOPHRENIA: a disease of the bone marrow or the brain?
Science
VISION, BRAIN, LONGEVITY: Research Results
Science
WORDS AND THE BRAIN: THE BENEFITS AND HARMS OF OBSCENITIES