INTELLIGENCE IN OUR HEART: WHO IS THE MOST IMPORTANT IN THE WORLD? 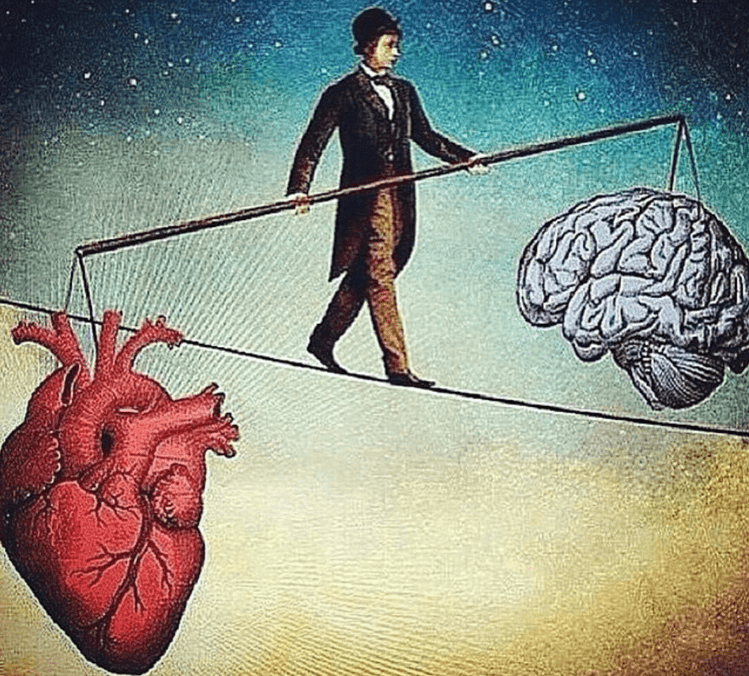 The opposition of “mind” and “heart” has long been entrenched in culture. But let us ask ourselves the question: to what extent is it justified and what does modern neuroscience say about this?

Today, the human brain is the most desired and demanded hero of various talk shows and books. However, the heart did not give up so easily – its battle with the brain for the title of the main organ in the human body continues …

Swiss scientists, using MRI, studied the brain response of 153 participants in the experiment to visual stimuli. If the frequency of the flashes on the screen matched the frequency of the heartbeats, it was more difficult for them to focus on those flashes. The reason is that the insular lobe of the brain significantly reduces activity, “filtering out” the heart signals that interfere with adequate perception of the external world.

That is, when you are encouraged to “listen to your heart,” your brain will not always agree with this statement. It may well ignore information coming from the heart as unnecessary or harmful. Overall, the brain is certainly capable of effectively controlling the heart. Nevertheless, the latter also has the “right to vote”.

The fact is that the heart has its own “little brain” – neural clusters in its upper part that help regulate heart rhythms. Therefore, Blaise Pascal was absolutely right in asserting that “the heart has reasons that the mind cannot understand”.

Strong emotions that increase the heartbeat, such as love or fear, are sometimes beyond the power of even the brain with its dictatorial habits. The heart is the most important hormonal organ that is responsible for the production of the “balance hormone” and “love hormone”.

The latter is scientifically called oxytocin, and without it, adequate social behavior and manifestations of human emotional development – care, trust, gratitude, appreciation – would be impossible.

There are known examples when people with a rather modest intellectual level confidently and quickly solved the tasks assigned to them. It has been suggested that in such cases, low intelligence is compensated by developed intuition. But where does it come from? Ultimately, the facts accumulated by science about the “heart brain” made it possible to introduce such a concept as heart intelligence.

After “emotional intelligence” and “political intelligence” took root in management psychology, “heart intelligence” did not surprise anyone. The intellect of the heart is a high level of perception, which makes it possible to make life events more real, true, and develops intuitive thinking.

“When thinking calms down and we learn to control it, at this moment intuition wakes up, and everything around becomes much clearer than seen before,” Steve Jobs said. He is absolutely right – our brain doesn’t like to be controlled. Therefore, it will not be possible to turn on the mind and intuition, the “intellect of the heart” and the “intellect of the brain” at the same time.

Intuition is related to sensations, and the sensations that come from the heart are not related in any way to the mind. However, it is not only impossible to determine what is better or worse, but it is also pointless. People with high heart intelligence can be just as successful and effective as people with high IQ. We know a lot of evidence when intuition played a decisive role in scientific discoveries or business ideas.

There is a version that heart rhythms, organized in a certain way, can increase a person’s ability to perceive the world around him more comprehensively, “in all its completeness”. Conversely, without developing heart intelligence, our thinking about the world is more driven by habitual emotions, reactions, and patterns of behavior.

We are used to thinking that our cognitive abilities are solely related to the activity of the brain. However, medical research by Mark Newman has shown that this is not the case. He found that memory, attention and concentration decreased immediately after bypass surgery. Moreover, this decline is long-term.

The scientist linked this with blood flow to the brain, thus establishing a direct connection between the heart and the brain through blood circulation. Human intelligence, and even such a field as mathematics, the heart is also not ready to completely surrender to the brain.

Doc Childre, the founder of the direction with the exotic name “mathematics of the heart”, believed that the heart is wrong to imagine as a pump that simply pumps blood under the control of the brain. The Institute of Mathematics of the Heart claims that it plays a critical role in the functioning of human intelligence, emotions and personality.

It is no coincidence that professional athletes, military men, doctors, teachers and students use its developments, getting amazing results. It is no coincidence that in archaic cultures what we today attribute to the brain was associated with the heart: intuition, love, wisdom, creativity … Today science has confirmed the correctness of ancient concepts.

The point is that the heart “communicates” physically with the brain. Moreover, it does this communication not only through the part of it that is responsible for emotions, but also through the zones associated with the processes of thinking and reasoning. The heart, along with the brain, is capable of remembering, storing and transmitting information through blood pressure impulses.

In addition, the heart is the most powerful emitter of electromagnetic energy. Scientists have measured this electromagnetic signal and found that it “reaches” in all directions from our body by about 3 meters. It is quite possible that this is the very field of “personal space”, the intrusion into which is fixed not only by the brain, but also by the heart.

All organs of our body, all its cells, including brain cells, are under the influence of the electromagnetic field of the heart. It is no coincidence that British scientists discovered the interdependence of brain and heart problems: people with below average intelligence are much more likely to suffer from cardiovascular diseases.

AN ANCIENT DISPUTE HAS NOT ENDED YET

Without exaggeration, the brain in the modern world can be called “the most media organ”: a huge number of programs and films are shot about it, an incredible number of books and articles are published … But the heart is obviously not paid much attention in the world cultural and scientific discourse today.

In their bestselling book on the brain, neuroscientists Eric Chandler and Lisa Johnson say that people have not always highly prized the brain. Ancient cultures were much more respectful of the heart than the “gray matter”. For example, when making mummies, the ancient Egyptians preserved the heart, liver, stomach, intestines, kidneys and lungs of the deceased, and the brain was taken out through the nose and thrown away.

The heart, not the brain, was considered the focus of thinking, sensation, and feeling. Nevertheless, it was the Egyptians who were the first to use the word “brain” in their earliest records, as evidenced by Edwin Smith’s surgical papyrus. But already the ancient Greek philosopher and physician Hippocrates treated the brain differently than the Egyptians – extremely rationally and physiologically. He argued that the brain is responsible for the mind and emotions, as he became convinced by observing people with serious head injuries.

But Aristotle believed that Hippocrates was wrong – it is the heart that is the repository of sensations and movements. And the brain, according to the ancient Greek philosopher, is intended only for cooling the blood.

Thus, since ancient times, humanity still cannot decide which is more important – the heart or the brain? What to prefer – soul or mind, intuition or intellect? And where do they actually live?

It seems that the final resolution of this dispute is still far away. And is it possible, in principle, to win in it, if we take into account that both the life of the mind and the life of the heart are equally important for a full-fledged human existence.

Science
NON-HUMAN BRAIN: MATH AND GROWTH THINKING
Interview
The main thing, guys, is not to grow old with your brain! Smart tips for your brain from neurologist Viktor Kholin (Part II)
Science
COLOR MAGIC: How «universal» salespeople make us to choose
Science
The most “scientific” fly turned out to be the most “cultured”
Science
A CONVERSATION WITH A SCIENTIST: Olga Dudchenko from Kyiv is a rising star in world science (Part I)
Interview
THE MAN OF THE DESERT: symmetry and light by Evgeny Katz (Part II)