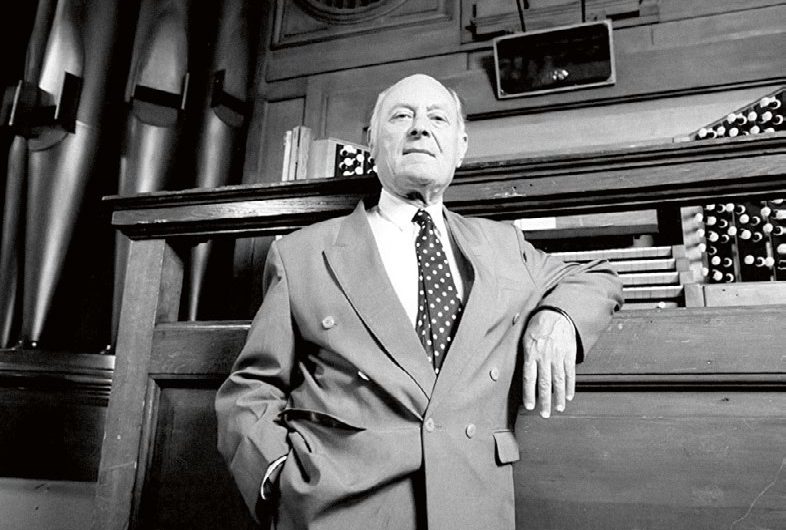 There are people who are destined to become legends. Such a person is our great compatriot — composer Alemdar Karamanov, author of the national anthem of the Republic of Crimea, creator of the musical trend «Religion in Symphonism».

If you still do not know this name, then you do not know everything about the musical culture of the twentieth century, the nature of genius and even… about yourself. Because any revelation is always a personal, mystical encounter with the Mystery.

We asked Alexei Botvinov, the performer of Karamanov’s music and pianist of international fame, to tell us about his experience of such encounters.

Today, in the 21st century, it is impossible to imagine that any symphony could be under a ban. In Soviet times, however, the authorities banned certain works for public performance in philharmonic societies. With regard to classical music, this seemed the most absurd. After all, music is a rather «abstract» art; there are no words, which means that one cannot express one’s anti-Soviet position.

As a young man I saw the fruits of this cultural policy. The greatest names in the history of music were consigned to oblivion. A striking example is the fate of two of the greatest composers who remained themselves in the twentieth century: Alfred Schnittke and Alemdar Karamanov.

If the first is well known all over the world, the second, not inferior to him in the scale of his creative talent, still remains underestimated. Mystically, both composers have played a huge role in my life.

After graduating from the conservatory in Odessa, I did my post-graduate studies at the Moscow Conservatory from 1987 to 1989. My teacher was Vera Gornostaeva, one of the greatest music teachers of her time. There were only 3 or 4 such teachers for the entire Union.

Vera Vasilievna was an outspoken dissident. Her house was an island of freedom, bringing together very interesting people, public figures and representatives of various creative professions, including musicians. Here one could freely talk about Solzhenitsyn, Voynovich, Rostropovich…

Such «forbidden» subjects were raised, about which in Odessa at that time people talked in a half-whisper. Willy-nilly, I was absorbed in this atmosphere, because the conservatory did not have enough classes and some classes were held in the apartment of Gornostayeva.

One day, when I was waiting for Vera Vasilievna at her house, a sheet music manuscript lying on the piano caught my attention. I began to study it. It was a piano concerto No. 3 by Alemdar Karamanov, called «Ave Maria». The name Karamanov did not mean anything to me at that time, it was the first time I saw it on this manuscript. But I was immediately struck by the musical language – it was unlike anything I had encountered before.

I wanted to play this concerto. And then Vera Vasilyevna came into the room. «Amazing! — she said. — These notes have been lying here for years, waiting for someone to open them. Try to play…» From Vera Vasilievna I first heard about Karamanov, a brilliant composer and religious dissident.

Party functionaries forbade performing his works because he gave them religious titles and categorically refused to change them. Later I learned that Karamanov had composed 24 symphonies for large orchestra. He chose a name for each of them from the world of the Bible.

Vera Vasilievna told me that Karamanov graduated from the Moscow Conservatory back in the ’60s. Alfred Schnittke, Edison Denisov and Sofia Gubaidulina studied with him at the same time. They socialized, became friends and exchanged musical ideas. Schnittke is the most famous name in the world of music, but Denisov and Gubaidulina are also among the twenty best composers of the last century.

But Alemdar Karamanov has yet to be discovered by the world. Gornostaeva told me that Schnittke thought Karamanov was the most outstanding of the four. Then I found confirmation of this confession in Schnittke’s own words.

He repeatedly said that there were talented composers and there was Karamanov – a true genius, a unique personality who had a tremendous influence on Schnittke himself. In the ’50s and ’60s they were really friends and they communicated a lot. It’s unbelievable how two such powerful figures came together at one point in time and space — an unprecedented event in history!

SYMPHONIES NO ONE KNEW ABOUT

Schnittke, Denisov, and Gubaidulina became iconic figures after graduating from the Moscow Conservatory. They were on everyone’s lips even after the end of the Thaw was marked by the persecution of the avant-garde. Schnittke did a lot for the film industry. He wrote music for 70 films and earned his living that way. Edison Denisov and Gubaidulina composed for the theater… But Karamanov was the only one of them who took a radical decision — he left Moscow!

Although many dissuaded him from taking that step. In particular, that same Shostakovich. Karamanov held Karamanov in high esteem. But Alemdar Sabitovich was adamant. He moved to Simferopol, where he lived on very small wages but wrote very prolifically. And almost all of it — all 24 symphonies! — to the desk. True, he never gave up hope that one day they would be performed before an audience. I visited his apartment in Simferopol. It is very ascetic, tiny Khrushchev apartment. It’s incomprehensible how such great things were born in that small space!

I was very intrigued by Gornostaeva’s story about Karamanov. I wanted to know more about the piano concerto, which I accidentally discovered at her home. It turned out that the piece was written back in 1968. At the same time, there was one isolated and very unsuccessful attempt to perform it. Then Karamanov gave the manuscript to Gornostaeva, who was always happy to make contact with dissidents and sincerely helped them.

She was interested in bright and unusual people who went beyond the «Soviet norm». Handing her the score, Alemdar Sabitovich asked to find a pianist who could truly understand and «decipher» it. And finally, after many, many years, Gornostaeva, hearing my performance, decided that she had found such a pianist. So my meeting with great music took place. First with the manuscript and then with its author.

THEY WERE THE EYES OF A PROPHET

Alemdar Karamanov came to Moscow at Vera Vasilievna’s invitation. From the first meeting it became clear to me that this is a unique person. I was struck by his eyes. It was the look, which, it seems to me, may be only a genius or religious prophets. When I played Karamanov a concerto, he said: «That’s it!» and even «It’s congenial». And then Gornostaeva suggested this concerto for further performance.

At first there was a small tour with an orchestra whose name I no longer remember. And in ’90, there was a performance at the Great Hall of the Moscow Conservatory with the Great Symphony Orchestra conducted by Vladimir Fedoseyev. The orchestra performed the Karamanoff Symphony, and I performed the Ave Maria. The concert had a great resonance and excellent press coverage. Virtually all the national newspapers wrote about it.

After this there was no doubt that there will be a surge of interest in Karamanov’s music. And indeed Fedoseyev and his orchestra have planned a major tour of Great Britain. About 20 performances, where only Karamanov’s music was supposed to be played. Including the concerto I was playing.

This time, however, it was no longer the Soviet authorities but fate itself that got in the way of those plans. The music unions (you won’t believe it, there are some in Britain!) went on strike. So all the foreign tours were cancelled, including those of the Moscow orchestra.

This failure really upset Fedoseyev. He was so upset that he instantly cooled down to any further promotion of Karamanov’s music. Well, I, a young novice musician, could not do it at that time.

HE WANTED TO BE HEARD

Fortunately, at the same time, independent Ukraine finally noticed its great compatriot. Not just attention was paid to him. Karamanov’s music began to be recognized as a national cultural treasure. Alemdar Sabitovich wrote the anthem for the Autonomous Republic of Crimea. The government awarded him the Shevchenko Prize. A musical contest in his name was established. That is, he still got his deserved fame at the end of life.

But, unfortunately, all this happened inside the country, and outside Ukraine the importance and greatness of Karamanov’s music is still not fully known. Karamanov himself experienced the lack of access to the world audience rather painfully. He really wanted the world to hear him after so many years of oblivion.

I hope that for my part I am making a significant contribution to making Alemdar Karamanov, our great compatriot, known and loved all over the world. In recent years I have made several of my own arrangements of the Concerto No.3.

I have included it in my solo programs abroad, and I have great pleasure to note that Karamanov’s music is always a success in Switzerland, Germany… It makes a huge impression on Europeans.

Today many people already recognize that Karamanov is a global figure that deserves recognition no less than Schnittke. He was fortunate in his time — his music was promoted by the outstanding violinist Gidon Kremer.

Thanks to him, Schnittke was noticed in Europe, and he subsequently became an unquestionable authority in the world of music. Karamanov did not have his own Kremer at the time, and this was hardly possible in his situation. But times, thank God, are changing. And I am sure that the world’s full-fledged discovery of Alemdar Karamanov is yet to come. I have every reason to do so.

SCHNITTKE CONSIDERED HIM A «LIVING CLASSICIST»

Interestingly, the mystical coincidences didn’t end there. Together with Daniel Hope, one of the greatest violinists of our time, we recorded a concert of Schnittke’s music on Deutsche Grammophon. The disc received a lot of the most complimentary reviews. It’s always nice when your work is appreciated.

But the most real revelation for me was Hope’s account of his interactions with Alfred Schnittke. I, unfortunately, did not catch Alfred Schnittke in Moscow. When I was in graduate school, he had already moved to Hamburg, which is where Hope, a student, got to know him.

Music is a universal code that appeals to our consciousness, bypassing the limitations that language, nationality or national identity impose on a person

They developed a rather warm and trusting relationship. Schnittke let him in on the secrets of his skill and his style. You could say they had the same creative «encounter» between composer and performer as I had with Karamanov.

In the early ’90s, while still a student, Hope managed to organize a big festival for Schnittke in Great Britain. And he asked the composer a question: who from the former USSR would you like to see as guest “stars” at the festival? Schnittke mentioned two names, one of which was Karamanov. Naturally, Hope was surprised – it was the first time he had heard that name! He tried to make inquiries, but no one in his musical circle knew who it was.

However, listening to Schnittke, the organizers invited Alemdar Sabitovich to the festival as a guest. It was not just Karamanov’s first visit to Britain – it was his first trip outside the Soviet Union at all. Despite the fact that the composer wrote nothing for solo violin, Hope nevertheless took a decisive step toward Karamanov’s promotion by organizing his first foreign visit.

After that, Alemdar Sabitovich even had several concerts in Europe. Of course, Hope didn’t know who Karamanov was, but he trusted Schnittke’s opinion. And Schnittke, according to Daniel, ranked Karamanoff so highly that everyone was intrigued. «You have no idea what kind of man he is», — he said, — «you will know at once when you see and hear him that he is a genius and a living classicist».