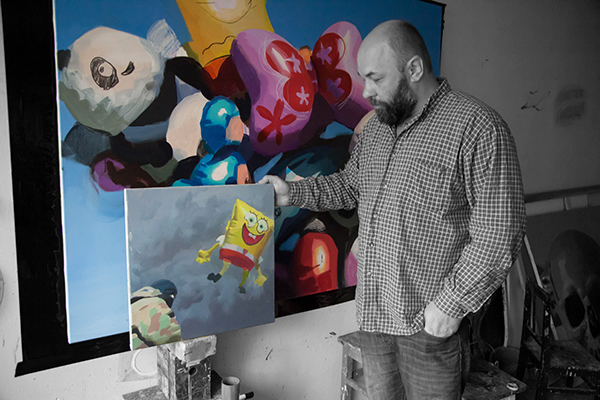 Maksim Mamsikov managed to become a recognizable artist with a characteristic style and a solid price tag, having entered the history of modern Ukrainian art and continued the creative dynasty, strengthening the name of his father – Vladislav Mamsikov. In world practice, such a status quo is often achieved not only by the artist’s own talent, but also by a consistent strategy, thought out to the smallest detail. Does Maksim Mamsikov have one?

At first glance, it may seem that there is no strategy and cannot be. Mamsikov talks about his decisions as if he did not accept them, but on the contrary – they accepted him. For example, the artist believes that the initial impulse that prompted drawing is simply the possibility of avoiding music lessons.

And he allegedly entered the art academy in order to “avoid” the army. It didn’t work out, but Mamsikov didn’t give up his creative activity either. This is where that inevitability from the title begins, because it seems that art has become entrenched in the artist’s life almost on a residual principle, conditionally, thanks to heredity.

But the inevitability does not end there, but migrates into the very work of Maksim Mamsikov. As art critic Victoria Burlaka writes about him, the artist “cultivates his own lyrical ‘indifference’” [1]. Indeed, Mamsikov openly declares his apoliticality and conformism, believing that one should choose one between the roles of an artist and a citizen.

Thus, the plots of his paintings are often dictated by rather everyday events and phenomena, as if again decisions are made by themselves, and the artist acts as if in the role of a documentary filmmaker. As if the author is not responsible for what he created, leaving this burden to the circumstances that influenced him.

By the way, Mamsikov really often falls under the influence, which is generally typical for sensitive and responsive people. It happened with the charismatic company of the Paris Commune, to which Maksim joined, especially fascinated by Oleg Holosiy.

Painting of that period really stands on a par with the works of his associates, including A. Gnilitskiy, V. Trubin, D. Kavsan and others. These paintings resemble dreams that are about to be forgotten, they have already blurred and lost their colorfulness, but they have forever preserved their fabulousness, mysticism, and a slight mystery.

At the same time, even then, Mamsikov’s work was a slight wavering of realism, and his later works were generally performed in a hyperrealistic manner. The artist explains it with reverence for cinema and consistent visual perception. He says that he generally “likes to look at pictures”. Many of Mamsikov’s works really look like screenshots, frames, as if taken out of context, which the viewer is free to think out on his own.

Researchers believe that the last work, created in the squat of the Paris Commune, “Lantern”, became a sad omen of “the end of the era” [2]. And indeed, after the tragic death of Golosiy and the collapse of “Parkommuna”, Maksim Mamsikov, being depressed, for some time turns away from painting.

And the artist returns already hardened, as if after the end of his first love – a little less romantic and a little more pragmatic. In accordance with the state of the market at that time, Mamsikov creates “pocket” paintings, which are much easier to sell than large canvases. And again it turns out that every step of the artist has some kind of justification, as if not depending on him.

The plots of the newer episodes do not seem to be overloaded with complex meanings. For example, a series of bright balloons against the background of a blindingly clear sky resembles the work of Jeff Koons, who, on the one hand, makes fun of the consumer society, shiny on the outside, empty on the inside, and on the other, makes a significant contribution to the same system by selling his “toys” for record millions.

Such commercial success, the American brokerage past and the hired team of performing artists give many reasons to believe that Koons’ work is just a rather pragmatic strategy with marketing elements. As for Maksim Mamsikov, it may be that his strategy lies in the absence of a strategy, in his full confidence in the case and situation. Fatalism, leaving room only for the inevitable – for art.

[1] Victoria Burlaka. Reflections of a neon sunset / Mirror of the Week. Ukraine